To share your memory on the wall of Valmon Trainham, sign in using one of the following options:

Funeral Services will be held at 2:30 pm Saturday, January 25, 2020 at the Stephenville Funeral Home Chapel with Gary Williams officiating. Interment will follow at the Lingleville East End Cemetery. The family will receive friends from 6:00 pm until 8:00 pm Friday at the funeral home.

Val was born on July 8, 1962 in Verdun, France to Kenneth Earl and Joyce Peeler Trainham. He married Susan Parks on September 10, 1994 in Lingleville. Val is a graduate of Mineral Wells High School and attended SFA University. He worked for many years in sales, and several years as a truck driver. Val has resided in Stephenville for the past 25 years. He attended Graham Street Church of Christ.

Val was preceded in death by his father, Kenneth Earl Trainham; and by his father-in-law, James Mac Parks.
Read Less

To send flowers to the family or plant a tree in memory of Valmon Earl Trainham, please visit our Heartfelt Sympathies Store.

Receive notifications about information and event scheduling for Valmon

We encourage you to share your most beloved memories of Valmon here, so that the family and other loved ones can always see it. You can upload cherished photographs, or share your favorite stories, and can even comment on those shared by others.

Judy Cann, Kim, Amber, and Zane Ray, and other have sent flowers to the family of Valmon Earl Trainham.
Show you care by sending flowers

Posted Jun 27, 2020 at 12:59am
I am so sorry to hear of Val’s recent passing. I knew Val through time spent at PK Lake as teenagers. What a nice young man he was to me. Blessings of peace to you and yours.
Comment Share
Share via:
HS

Flowers were purchased for the family of Valmon Trainham. Send Flowers

Posted Jan 25, 2020 at 05:28am
My sweet friend Val, may you be at peace now with our Father in the beautiful of most beautiful places and final destination. RIP Brother.

Posted Jan 24, 2020 at 10:21am
Wishing you peace to bring comfort, courage to face the days ahead and loving memories to forever hold in your hearts. Much love

Kim, Amber, and Zane Ray purchased flowers and planted a memorial tree for the family of Valmon Trainham. Send Flowers 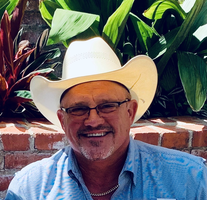