To share your memory on the wall of Royce Sims, sign in using one of the following options:

Royce was born on May 14, 1932 in Lingleville to the late Hugh Thomas and Edna Odeal Robinson Sims. He married Loy Derelle Elston on December 12, 1953 in Fort Worth and together they raised 4 children. She preceded him in death on April 7, 1995.He later married Nora Potter Laney on November 16, 1999 and she preceded him in death on June 23, 2011. Royce served in the U.S. Air Force and worked as a mechanic. He was a member of the Harvey Baptist Church.

Due to the Covid-19 restrictions the family will schedule a memorial service at a later date.
Read Less

To send flowers to the family or plant a tree in memory of Royce Loran Sims, please visit our Heartfelt Sympathies Store.

Receive notifications about information and event scheduling for Royce

Print
Due to the Covid-19 restrictions the family will schedule a memorial service at a later date.

We encourage you to share your most beloved memories of Royce here, so that the family and other loved ones can always see it. You can upload cherished photographs, or share your favorite stories, and can even comment on those shared by others.

The Tucks sent flowers to the family of Royce Loran Sims.
Show you care by sending flowers

The Tucks purchased flowers and planted a memorial tree for the family of Royce Sims. Send Flowers 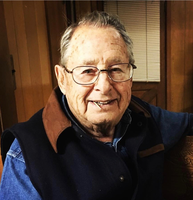