To share your memory on the wall of Ronald Chappell, sign in using one of the following options:

Provide comfort for the family of Ronald Chappell with a meaningful gesture of sympathy.

Memorial services will be held at 10:00 AM Friday, September 27th at Cowboy Church of Erath County with Brother Werth Mayes officiating. Following services his cremains will be buried at Lower Green’s Creek Cemetery. Services are under direction of Stephenville Funeral Home.

Ronald was born on December 30, 1949 in Indianapolis, Indiana, to the late Chester P. and Evelyn Pierson Chappell. In the mid 70’s Ron began his career in the trucking industry, an owner and operator truck driver. In July of 2019 Ronald had logged over 4 million miles. Trucking was his life.

Survivors include his sister and brother-in-law, Sharon and Bill Young; and a step-daughter, Margaret Wallace; and his canine nephew, Boots
Read Less

We encourage you to share your most beloved memories of Ronald here, so that the family and other loved ones can always see it. You can upload cherished photographs, or share your favorite stories, and can even comment on those shared by others. 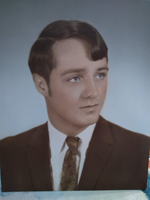