To share your memory on the wall of Robert Webster, sign in using one of the following options:

Robert Allen Webster, 48, of Stephenville, went into rest on September 28, 2019 in Fort Worth, Texas.

Robert Allen Webster, 48, of Stephenville, went into rest on September 28, 2019 in Fort Worth, Texas.

Robert was born May 14, 1971 in Binghamton, New York to Janice Kollman and James Webster. He was a truck driver at Carpenter Milk Service in Stephenville. He drove truck for 25 years. He grew up in Pennsylvania, California and lived in Las Vegas before moving to Stephenville with his family in 2008. He didn’t know a stranger. He loved having family BBQ’s and buying silly gifts for Christmas. He played guitar a majority of his life and taught and shared his love for music with everyone in his life. He loved traveling with the love of his life Valarie. He loved to dance silly with his friends and family. He will be greatly missed by everyone.

To send flowers to the family or plant a tree in memory of Robert Allen Webster, please visit our Heartfelt Sympathies Store.

We encourage you to share your most beloved memories of Robert here, so that the family and other loved ones can always see it. You can upload cherished photographs, or share your favorite stories, and can even comment on those shared by others. 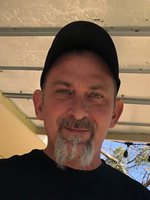