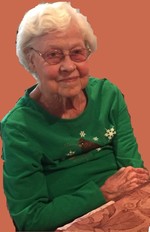 Martha Jo (Marr) Fanning, long time resident of Stephenville, passed away in San Antonio on January 03, 2020, after a short illness.

Visitation will be held at Stephenville Funeral Home Tuesday evening, January 07 from 5-7 pm. Funeral service will be a graveside service at Stephenville Gardens of Memory at 10 am January 08, 2020.

Martha was born in Stephenville on August 29, 1917, and was preceded in death by her husband, Robert Gerald Fanning. Both Martha and Gerald (R.G.) were deeply involved in the operation and growth of Tarleton State College/University for decades.