To share your memory on the wall of Marjorie Tevebaugh, sign in using one of the following options:

A memorial service will be held at 2:00 p.m. on Tuesday, October 27, 2020, at Rosewood Park Cemetery in Longview, Texas with Kory Koch officiating.

Marjorie was born on July 3, 1932 in Gilmer, Texas to the late Alvin Spencer and Rayner Lucille Moon Spencer. She lived most of her life in Gilmer, graduating from Gilmer High School class of 1949, and was a member of the First United Methodist Church. Marjorie was also the Duchess from Kilgore College to the Gilmer Yamboree in 1949. She moved to Stephenville in 1998 to be near her daughter and attended Oakdale United Methodist Church.

To send flowers to the family or plant a tree in memory of Marjorie Lorene Tevebaugh (Spencer), please visit our Heartfelt Sympathies Store.

Receive notifications about information and event scheduling for Marjorie

We encourage you to share your most beloved memories of Marjorie here, so that the family and other loved ones can always see it. You can upload cherished photographs, or share your favorite stories, and can even comment on those shared by others. 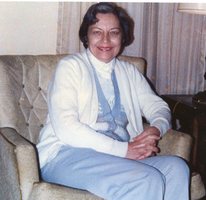