To share your memory on the wall of Lewis Atterbury, sign in using one of the following options:

Graveside services will be held at 2:00 pm Saturday, July 13, 2019 with Rev. Mike Hannah officiating. The family will receive friends from 7:00 pm until 9:00 pm Friday at the Stephenville Funeral Home.

Lewis Atterbury was born on December 6, 1925 in Energy, (Comanche County). To the late Lewis and Mollie Kearney Atterbury. He married Ruth Blakey on August 1, 1947 in Seagraves and she preceded him in death on November 5, 2018. Lewis served in the U.S. Army in the South Pacific during WWII. He retired as a Master Carpenter and Contractor after 63 years. He also farmed, ranched, and bought and sold real estate. Lewis was a lifelong Methodist and attended the Greens Creek Methodist Church.

To send flowers to the family or plant a tree in memory of Lewis B. Atterbury, please visit our Heartfelt Sympathies Store.

Receive notifications about information and event scheduling for Lewis

We encourage you to share your most beloved memories of Lewis here, so that the family and other loved ones can always see it. You can upload cherished photographs, or share your favorite stories, and can even comment on those shared by others.

Art and Sharon Riddle sent flowers to the family of Lewis B. Atterbury.
Show you care by sending flowers

Flowers were purchased for the family of Lewis Atterbury. Send Flowers 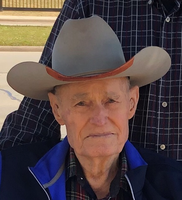