To share your memory on the wall of J.D. Chapman, sign in using one of the following options:

Provide comfort for the family by sending flowers or planting a tree in memory of J.D. Chapman

Provide comfort for the family by sending flowers or planting a tree in memory of J.D. Chapman

Funeral services will be held at 2:00 pm Saturday, May 2, 2020 at the Stephenville Funeral Home Chapel. Burial will follow at the West End Cemetery. The family will receive friends Friday from 6:00 pm until 8:00 pm at the funeral home

J.D. was born on August 17, 1934 in Morgan Mill to the late Carl and Elsie Chapman. He married Lou Morris on April 10, 1957 in Pioneer, Texas. She preceded him in death on November 16, 2017. J.D. worked for the city of Stephenville Water Dept. for 31 years before his retirement. He was a member of the Church of the Nazarene.

To send flowers to the family or plant a tree in memory of J.D. Chapman, please visit our Heartfelt Sympathies Store.

Receive notifications about information and event scheduling for J.D.

We encourage you to share your most beloved memories of J.D. here, so that the family and other loved ones can always see it. You can upload cherished photographs, or share your favorite stories, and can even comment on those shared by others. 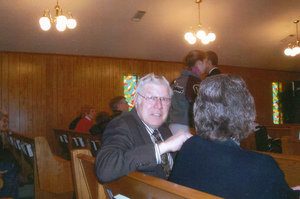