To share your memory on the wall of James Grigsby, sign in using one of the following options:

James Oneal Grigsby, 77, of Stephenville, passed away on Thursday, August 6, 2020, in Fort Worth.

James Oneal Grigsby, 77, of Stephenville, passed away on Thursday, August 6, 2020, in Fort Worth.

Memorial services for James will be set at a later date.

James was born on April 18, 1943, in Palo Pinto, Texas to the late George and Clara Stockstill Grigsby. He graduated Valedictorian from Gordon High School in 1960. He attended the University of Texas at Arlington where he received a Bachelor’s Degree in History, Health and Physical Education. James married Jo Beth Ezell on August 18, 1984 in Strawn. He taught Science, History, Health and Physical Education at high school level, coached varsity athletics in the Gordon ISD and Strawn ISD. James was a member of the Cowboy Church of Erath County, and has spent the past 31 years in Stephenville.

Other than God and his family, James had 2 great loves; the love of baseball and the love of animals. He loved attending his grandchildren’s events and especially liked watching them play sports.

James is survived by his wife, Jo; sister, Nelva and husband David Drake of Gordon; son, Glen and his significant other Jessie Gagnon of Plano; daughter, Jennifer and husband Joe Fails of Comanche; and four grandchildren, Connor, Paisley, Parker, and Lennox Fails

Besides his parents, James was preceded in death by a brother, George Grigsby; and a sister, Patsy Bond.

To send flowers to the family or plant a tree in memory of James Grigsby, please visit our Heartfelt Sympathies Store.

Receive notifications about information and event scheduling for James

There are no events scheduled. You can still show your support by sending flowers directly to the family, or planting a memorial tree in memory of James Grigsby.
Visit the Heartfelt Sympathies Store

We encourage you to share your most beloved memories of James here, so that the family and other loved ones can always see it. You can upload cherished photographs, or share your favorite stories, and can even comment on those shared by others.

Posted Aug 24, 2020 at 05:49pm
I remember James singing Mack the Knife out on the school grounds. I don't know if he was just visiting or still in school at that time. Strange the things you remember about someone. R.I.P.
Comment Share
Share via:
JM

Posted Aug 21, 2020 at 12:21am
Everyone in high school in the early 60`s at Gordon would greet each other by saying Mow Wink. Heard James say it many times. I never knew what it meant. I don`t think anyone did. Lots of great memories of James. R.I.P
Comment Share
Share via: 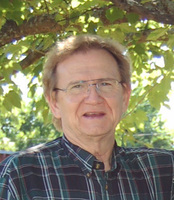