To share your memory on the wall of George Coats, sign in using one of the following options:

George was born August 16, 1957 in Odessa to the late James P. and Juanell Maxwell Coats. He grew up as a military dependent while his father served in the armed ... Read More
George McKenzie Coats, 63, passed away September 30, 2020 in Stephenville.

George was born August 16, 1957 in Odessa to the late James P. and Juanell Maxwell Coats. He grew up as a military dependent while his father served in the armed forces. He worked many different jobs, handyman, mechanic, but his greatest joy was helping others. George has resided in Stephenville for the past 8 years after previously living in Proctor. He was a member of Cornerstone Assembly of God in Stephenville.

George was survived by his son, Uriah Chad Coats of Colorado Springs; sisters, Laura and Craig of Waxahachie, Cathy and Sam of Cleburne, Jennifer and Gerald of Rotan; and numerous nieces, nephews, great nieces, and great nephews.

To send flowers to the family or plant a tree in memory of George McKenzie Coats, please visit our Heartfelt Sympathies Store.

Receive notifications about information and event scheduling for George

There are no events scheduled. You can still show your support by sending flowers directly to the family, or planting a memorial tree in memory of George McKenzie Coats.
Visit the Heartfelt Sympathies Store

We encourage you to share your most beloved memories of George here, so that the family and other loved ones can always see it. You can upload cherished photographs, or share your favorite stories, and can even comment on those shared by others. 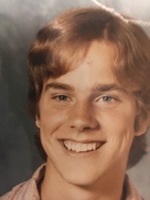