To share your memory on the wall of Douglas Jackson, sign in using one of the following options:

Douglas Lee Jackson, 40, of Morgan Mill, went to be with his Lord and Savior on Sunday, September 27, 2020 doing what he loved, playing golf.

Douglas Lee Jackson, 40, of Morgan Mill, went to be with his Lord and Savior on Sunday, September 27, 2020 doing what he loved, playing golf.

Funeral services for Douglas will be at 2:00 PM Thursday, October 1, 2020 at Morgan Mill Baptist Church with Brother Joe Rogers officiating. Burial will follow at Morgan Mill Cemetery. Visitation with the Jackson family will be 6:00 PM to 8:00 PM Wednesday at Stephenville Funeral Home.

Douglas was born on August 17, 1980, in Fort Worth, TX. He was a member of the Stephenville High School class of 1999. On April 9, 2005, Douglas married Clarissa Lynn Moses in Morgan Mill. To that union was born Amber Leigh, Dryston McKinley, and Ethan Kane Jackson. Douglas served his country in the U. S. Coast Guard. He was a member of the Harmony Masonic Lodge #592 in Morgan Mill, and Morgan Mill Baptist Church. He loved the game of golf. Douglas worked as an installer with Dish Network, and was a lifelong resident of Erath County.

Douglas loved his family, and believed that family was the most important thing in the world. Everyone in the family knew that on their birthday he was going to be the very first phone call they got. Douglas met and married his wife Clarissa in 2005. During their life together they have raised three children who have been the center of their world. He loved doing all sports, but especially loved playing the game of golf. He shared his love for golf with his wife and children as he taught them to play the game. Douglas had the honor of becoming a Mason, and held this honor with pride understanding what it truly meant to be a mason. Douglas never met a stranger, and was always willing to help anyone in need. He lived his life to the fullest, never afraid of anything. Douglas’s faith in God was so strong that there is no doubt that he is in heaven watching over everyone, continuing to be the great protector that he was.

Douglas was preceded in death by his grandfather, Eddie Chauncy, who we are certain he is playing golf with in heaven as we speak.

Online condolences may be made at www.stephenvillefh.com

To send flowers to the family or plant a tree in memory of Douglas Jackson, please visit our Heartfelt Sympathies Store.

Receive notifications about information and event scheduling for Douglas

We encourage you to share your most beloved memories of Douglas here, so that the family and other loved ones can always see it. You can upload cherished photographs, or share your favorite stories, and can even comment on those shared by others.

Lynn Mose, Kevin and Stacey Roquemore, and other have sent flowers to the family of Douglas Jackson.
Show you care by sending flowers

3 trees were planted in the memory of Douglas Jackson

Posted Oct 01, 2020 at 09:37am
Douglas, You were the first person to ever take me hunting. We went into the pasture way too early on a way too cold morning in December and saw nothing for hours but I’ll never forget it. Thank you. R.I.P 🙏
Comment Share
Share via:
KR

Posted Sep 30, 2020 at 09:40am
Wishing you peace to bring comfort, courage to face the days ahead and loving memories to forever hold in your hearts. We love you very much. 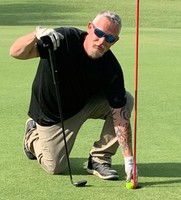