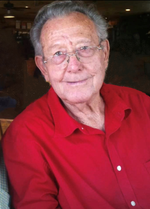 Don was born on October 10, 1931 in Gatesville, Texas to the late Charles ‘Red’ and Tamma Jewel Spencer Williams. He married Betty Lou Welch on July 10, 1952 in Crosbyton, Texas. Betty preceded him in death on October 20, 2011. Don served his country in the U. S. Army. He was a member of the Huckabay Church of Christ, and lived several years here in Erath County. Don owned and operated Don's Upholstery for over 50 years, and was a big supporter of Huckabay Indian basketball where he would spend his Friday nights cheering on his many extended grandchildren from the stands. He loved traveling near and far in his motor home to be close to friends and family.

Besides his parents, and his wife, Betty; Don was also preceded in death by a son, Larry Don Williams; brother, Dave Williams; and sister, Minnie Sue Copeland.

The Williams family wishes expressions of sympathy be made in the form of donations to the Foster’s Home for Children, P. O. Box 978, Stephenville, Texas 76401.