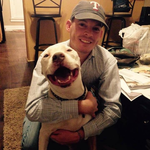 Memorial services will be held at 10:00 AM Friday, April 19th, at First United Methodist Church in Stephenville with Howard Martin officiating. Visitation will be 7:00 PM to 8:00 PM Thursday at Stephenville Funeral Home.

Trey was born on March 24, 1988 in Fort Worth. He attended public school in Stephenville, and graduated from Stephenville High School in 2006. Trey attended Texas Tech University, and was a member of their Kappa Sigma Fraternity; he later attended West Texas A&M University in Canyon, Texas, and received his Bachelor’s degree in Ag Finance. He was a member of the First United Methodist Church, loved to cook for his family, and enjoyed the outdoors.

The Adam’s family wishes expressions of sympathy be made in the form of donations to First United Methodist Church, or to the Erath County Humane Society.