We're sorry but the candle you have selected is currenty in the process of being purchased or has just recently been purchased.

Please feel free to select another candle or check back in 15 minutes to see if the candle you have selected has been released for purchase.

We're sorry but there are no candles available for lighting.

You have already begun a candle purchase session. If you would like to continue with your current candle choice please click "Continue" otherwise please click "Select Another".

In Memory of
Kizzie Allen
Pack Harper
1917 - 2018
Click above to light a memorial candle.

The lighting of a Memorial Candle not only provides a gesture of sympathy and support to the immediate family during their time of need but also provides the gift of extending the Book of Memories for future generations.

In the event that there is an error
in the information presented,
please contact the funeral
home by clicking here. 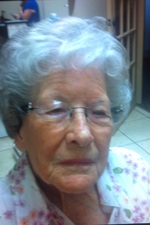 Funeral Services will be held at 11:00 am Thursday, February 15, 2018 at the Stephenville Funeral Home with Gary Williams officiating. Interment will follow at the Huckabay Cemetery in Huckabay. The family will receive friends from 5:00 to 7:00 pm Wednesday at the funeral home.

Kizzie was born on May 8, 1917 in Huckabay to the late Joe and Lena Allen. She married Clarence Pack on October 16, 1937 in Stephenville and together they raised a daughter. He preceded her in death on May 7, 1992. She later married Raymond L. Harper on September 10, 1993 in Hillsboro and he preceded her in death on August 12, 2008. Kizzie worked for the FWISD for many years as a cafeteria manager until her retirement. She was a member of the Church of Christ.

Survivors include her daughter, Betty Byrom and husband Charles of Richland Hills; grandsons, Marc Byrom of Springtown, and Eric Byrom of Flower Mound; great-granddaughter, Halle K. Byrom of The Woodlands; and many nieces and nephews.
She was also preceded in death by a brother and five sisters.

This Book of Memories brings those affected by loss together by encouraging communication and self-expression. By giving friends and family a special place to tell their stories and express their feelings of loss, it helps them care for one another during a very difficult time. Click on any of the links to the right to access features or information within this memorial website.